Shopping Cart
Your Cart is Empty
Quantity:
Subtotal
Taxes
Shipping
Total
There was an error with PayPalClick here to try again

Thank you for your business!You should be receiving an order confirmation from Paypal shortly.Exit Shopping Cart

Enniscorthy United moved to our permanent home Neil O'Sullivan Park in 1982. The ground was officially opened by the Wexford League Chairman Eamonn Murphy, and Pat Whitty, representing the Football Association of Ireland on Sunday, August 24th, 2003. Enniscorthy United welcomed Bray wanderers to the ground for the opening game.

Below, re produced by kind permission of The Enniscorthy Guardian, are a couple of articles marking the big day in the clubs history.

Though open for several years, of course, Enniscorthy United Soccer club has just got round to having an official opening to its Neil O'Sullivan Park.Called after the late 'Gus' O'Sullivan, honouring the club and county `supremo' this takes place on Sunday next, August 24, with a gala occasion planned. The ceremony takes place at 2 p.m. and will be followed at 3 p.m. by a game between the local club and league of Ireland side Bray Wanderers.

Opening of Neil O'Sullivan Park a tribute to an inspiring clubman Big day for the Blues as pitch officially opened.

THOUGH PLAYING at the Sean Browne Court pitch for several years now, for the once-nomadic Blues of Enniscorthy United Soccer Club, Sunday last marked a red-letter day indeed.For the official opening and blessing of Neil O'Sullivan Park finally gave them a sense of place, a real home, and a fitting tribute to the inspirational clubman whose memory the grounds commemorate.

Since '82 Moran Park was home base before the move by United to its splendid new surroundings. Sunday was just another step forward for this ambitious club which has ongoing and future pipeline plans.

First club Chairman, Dessie Sheehan, looked like he could show the younger members a 'step or two', while other founder members Paddy Dobbs and the late Neil's brother, Vinnie, were there too.

Others from the early days, as well as committee members and players down the decade were also present. Sadly, genial 'Gus' was not there to share the occasion, proud of his beloved 'Blues'.

Two club stalwarts unfortunately had to miss United's big day on Sunday last, Billy Plummer owing to a bereavement, and Joe O'Leary who was on holiday.

Local man Paddy Nolan was referee for Sunday's game. He is, of course, brother of long-time United player Sean, scorer of some 60 goals for the club.

Despite many great games in United's 38-year history, the most remembered and talked of pair were an all-club Wexford Cup quarter-final in May of '77 and an F.A.I. Junior Cup tie with Wicklow club Glenview in October '73.

In the former, the club's 'A' side just shaded their 'B' team opponents 4-3, but it was the latter game which was really amazing. The sides drew 6-6 after 90 minutes before a Glenview side led by the late, great Andy McEvoy won 9-6 in extra-time.

Vinny O'Sullivan, scorer of the United club's first-ever goal, also notched the Blues' 1,000th score, having hit the 700th in between. He is, of course, brother of the Neil 'Gus' O'Sullivan. 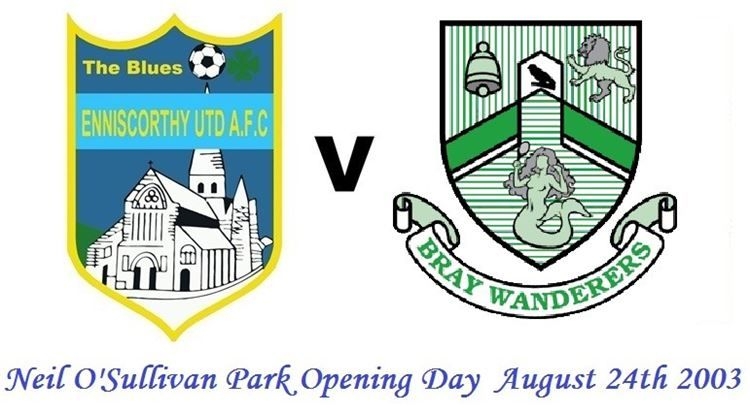 Prior to kick-off, the Wicklow side came to town as Eircom League First Division leaders, a late (88th minute) goal against Kildare County on Friday night seeing them leapfrog their rivals and two other clubs into top spot.

Not surprisingly, Bray fielded a team of mainly 'fringe' players here, not without a local touch in Marshalstown's Diarmuid Fitzpatrick and Bunclody's David Carton, sadly removed to hospital.

The home side actually led twice early on through a brace of well-taken Darren Walsh goals, but Bray levelled on each occasion and a close-range Gary Matthews score had the visitors 3-2 up at the break.

David Gough got their second goal after Fitzpatrick's first equaliser, while the second-half belonged to Maurice Dunne who completed a hat-trick to ensure a comfortable Bray win.

If anyone has any pictures from the day, please contact the club, we would love to post some of them up online.